Thomas Stephenson was a typical 21-year-old. In many ways, he had his whole life ahead of him. Thomas was an avid cyclist and loved playing baseball and pick-up basketball. He had just finished managing a number of political campaigns for the election cycle that November, and he was back to focusing on school for his final semester at Western Kentucky University in Bowling Green, Kentucky. Despite better plans, all of that changed on December 11th, 2014.

At 21 years old, Thomas suddenly went from a healthy and active triathlete to a trauma victim with a shattered spinal column, crushed feet and ankles, and a broken femur complemented with a broken sternum and clavicle.

On December 11th, 2014, Thomas was involved in a fatal car accident when his truck was struck head-on by an oncoming vehicle on I-840, south of Nashville, Tennessee. Thomas’ truck burst into flames and flipped down the interstate the length of a football field before coming to a stop.

At 21 years old, Thomas suddenly went from a healthy and active triathlete to a trauma victim with a shattered spinal column, crushed feet and ankles, and a broken femur complemented with a broken sternum and clavicle. With all the injuries sustained by the collision, Thomas was unable to get himself out of the car. Thankfully, a good Samaritan helped pull Thomas from the wreckage moments before his truck was fully engulfed in flames.

(Left) Thomas in hospital with wife Abby. (Middle) The burned out interior of Thomas’ truck. (Right) Thomas with his “good samaritan” who pulled him from the truck prior to it burning.

Thomas was immediately transported by LifeFlight to Vanderbilt University Medical Center where he underwent surgery to fuse his spinal column, a separate surgery to put a titanium rod through his femur and subsequent reconstructive surgeries on his feet and ankles. Thomas and his family were told Thomas’ life would never be the same. He wouldn’t run, play sports or be active moving forward.

He wouldn’t be able to stand or walk for extended periods of time. He would deal with a lot of pain and swelling through his feet and ankles continually. His life as everyone knew it would be drastically different. Thomas spent a few weeks in the hospital and was then transferred to a rehabilitation facility for the next month to begin physical therapy and recovery. 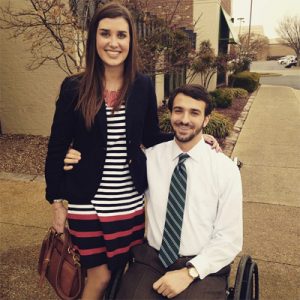 While Thomas was in the rehabilitation facility, he was mainly focusing on moving his legs and feet to regain muscle mass because his legs had atrophied considerably in the hospital. His physical therapy sessions were focused on other areas of the body not as affected by the trauma.

However, the physically defining trauma was not the only issue. There was emotional trauma as well. A once healthy and vivacious young man was now injured and told he would never be the same. He viewed himself as different, traumatized… inadequate.

By the time Thomas left the rehabilitation facility, he was still wheelchair-bound and had not attempted to stand, much less walk. After going home and then to Bowling Green for the Spring semester, Thomas continued physical therapy to regain strength and mobility. Soon after starting back to school, Thomas’ insurance-paid physical therapy visits ran out. Thomas still had so much recovery left ahead of him that there was no choice but to continue to pay for physical therapy out-of-pocket.

A Reason to Hope

While the physical therapy sessions continued, Thomas continued to progress. He built back muscle to be able to support his body weight, and finally, after lots of hard work, frustration, and determination, Thomas hit his biggest milestone up to that point. He was able to stand.

At that point, an emotional switch in Thomas flipped. He was no longer a frustrated trauma victim with limitations–he was an empowered and capable survivor who was more than an accident. He felt the first glimpse of what his life could look like, despite what anyone else told him. Thomas was resolved that the picture the doctors originally painted wasn’t going to be his.

He was no longer a frustrated trauma victim with limitations–he was an empowered and capable survivor who was more than an accident.

After standing, Thomas made progress by leaps and bounds. He quickly learned how to transition from standing to slowly walking. As he continued to progress, Thomas began walking, but he had a very noticeable limp. He still felt considerable pain when standing still for any period of time, and there were simple tasks that were difficult for Thomas to complete, like picking something up from the floor or tying his shoes.

Despite the progress up to this point, Thomas was almost continually frustrated by what he couldn’t do. He was closer to the end goal than he was before, but there was still a long way to go. It became obvious to Thomas and his family that physical therapy alone wasn’t going to get him where he needed to go.

As Thomas graduated from physical therapy, he began athletic and strength training to focus on movement, endurance, and flexibility. Of course, this necessary rehabilitation was not covered by insurance, and Thomas paid for this out-of-pocket as well. Just like physical therapy, Thomas saw tremendous improvement in his abilities the more he worked with his trainer. He immediately experienced wins with this different type of recovery.

Thomas was able to get relief and feeling back in his feet, bend over to pick objects up off of the floor, and feel more like himself. Over the course of a few months, Thomas’ limp went away, he started to gain strength, and he noticed the time and intensity of physical activity significantly increased over time. Today, thanks to ongoing therapy and strength training, Thomas is even more active than before his accident and was able to achieve a long-time goal of becoming an Ironman triathlete in 2018.

Even though this has been a long process for everyone involved, Thomas is now able to live a normal, active lifestyle despite the injuries, surgeries, and limitations that were in his way. He learned one thing is required to recover from a life-altering traumatic event like his accident–tenacity.

It takes constant mental, physical, and emotional tenacity to keep working towards improving quality of life after trauma and fighting through the excruciating pain to do so. While tenacity is necessary, physical therapy combined with athletic and strength training help get trauma survivors back to living their lives. However, not everyone has the monetary resources for this to be a reality, and that shouldn’t be the only thing to stand in the way of a full recovery.

From our journey, we know what it feels like to face the reality that your life may never be the same. No one should have to feel like trauma defines them, and no one should have to do this alone. We’ve walked this walk, and we have personally come out of a traumatic accident to live a lifestyle we both love. With that in mind, we created TENNACITY to help others do the same so they can become more than their accident and live the life they want to live.